About India’s Jharia Coal Mines It is surprising and also disturbing to note that what offers scope for huge commercial profits is also an immense source of pollution and the worst health ailments that mankind has ever known. We are talking about the Jharia coalfields.  It consists of 23 mines that lay underground and 9 large open ones, all now burning with high flames. Jharia coalfield fire started 100 years ago The fires raging in Jharia’s coal mines have been going on an astounding hundred years. It’s very difficult to put out any of them because once a coal seam has been ignited, unless it is snuffed early, it will go on for tens to even hundreds of years. So, though the abundant coal fields of Jharia are the most productive in the country, yielding very high quality coal, they are also the source of the worst pollutants.

A huge amount of poisonous gases are let into the atmosphere from mines on the surface. Furthermore, fires burning in the underground mines here have also created massive sinkholes that have taken the lives of many. Emissions from these fires are highly toxic as tests show that they have 40 to 50 hydrocarbons mentioned in britannica.com, many of which are carcinogenic. No steps were taken in the past on pollution and environment control here. Impact of coal mining on the environment and people living close by  Coal contains sulfur and many dangerous metals such as lead, arsenic and mercury, which get released into the air when it is burnt and this is great risk for our health . As coal is largely made up of carbon, it releases a tremendous amount of carbon dioxide into the atmosphere, which is known to increase the greenhouse effect and cause global warming. When coal is extracted on the subsurface area, the mines have a tendency to collapse thus trapping miners. People living closely the mines get black lung disease from pollutants arising from burning coal and coal particles. They can also get lung inflammation and respiratory problems. Coal that is removed from mountains results in removal of layers from the mountain top, which changes the landscape and disrupts the fragile ecosystem in the area. The smoke can also affect water bodies, contaminate them and increase their acidity levels. Land around the coal mine is unfertile and no vegetation grows in it. The temperature of the area increases and this combined with smoke can cause suffocation. Here is the report by New York Times “Dr. S. K. Bhagania in his private clinic in Jharia, holding up an X-ray for a coal-mining patient revealing a mass in the lungs. Many of those working in the coal industry and living near the open fires suffer from severe respiratory ailments including tuberculosis, pneumoconiosis and asthma. Credit Souvid Datta” If The Environment and Health Problems Due To Coal Mining Are So Bad, Why Are We Still Relying On Jharia Coal Mines as a Source of Energy? The Jharia coal mines were initiated in the late 1800s. The first fire broke out in 1916 and till today, it continues to rage, thus contributing to global warming. The question arises… why any action is not taken by the government to stop work in these mines completely. The answer is simple. These coal mines provide the highest quality coal in the country and mining coal from them fuels the country’s rapid economic growth.  It also stops the country from importing this grade of coal for energy purposes. While countries in the West are now thriving because of their huge technological advancement, developing nations like India, still really on coal resources for energy supply. Though the Modi Government has given hopes of making heavy investment into Solar energy, still it is not possible to move right away into it. Furthermore, Jharia coal fields have not been used to their complete potential as a huge amount of coal is lost to burning fires. Before taking action on how to put out the fires, we must learn how much is financial lost by the burning fires. It is estimated that 37 million tons of coal, with could have fetched billions of dollars if they had been mined has been lost to the fires. Adding to this is another 1.4 billion metric tons of coal which cannot be accessed anymore as raging fires are blocking them. These huge figures make it imperative for them to be put down right away so that their potential can be turned into a huge economical gain for the country. By putting out the fires huge profits can be gained from them. Hence talks are in progress to have them put out for this purpose… the question is when will that happen completely? What Is The Government Doing About The Health And Environmental Issues Of Coal Mining?  The first step taken by the government towards this is seen in efforts to relocate villages and settlements at a further distance from the mines, so that the fires can be extinguished. This is also protecting people from the pollution caused by their flames. These activities are expensive and the estimated cost is 1 billion dollars. The next step is initiation of activities that put out the fires. In case of near surface fires, the area above the fire has to be smoothened out so that heavy equipment can be taken over it. The entire fire zone is then cordoned into a grid structure and holes are drilled in it about 20 meters apart. Water is injected into the holes and this process must go on for one or two years. The area should be then covered by silt. Underground fires can be extinguished by first isolating the affected area with dam constructions and then feeding an inert gas like nitrogen through pipelines into the area for a period of time to douse flames. These methods should be followed to put out Jharia coal field fires and make them usable again. I have taken some photographs which has been used in Sabji Patti Jharia Durga Puja Pandal to show the truth about Jharia. Have a look: Updated: 3-2-2019 Jharia has become the most polluted city in the whole country due to its coal dust The Green Peace India has shared its report and found that Jharia has become the most polluted city in India. Dhanbad is in 9th position. Here is the newspaper cutting which I am going to share with you. After this news, Jharia people started movement to save Jharia. New Survey 2020: The Most Polluted City 2020 : Jharia and Dhanbad in Second Number https://timesofindia.indiatimes.com/india/jharkhands-jharia-most-polluted-city-delhi-reduces-air-pollution-marginally-greenpeace-report/articleshow/73496814.cms 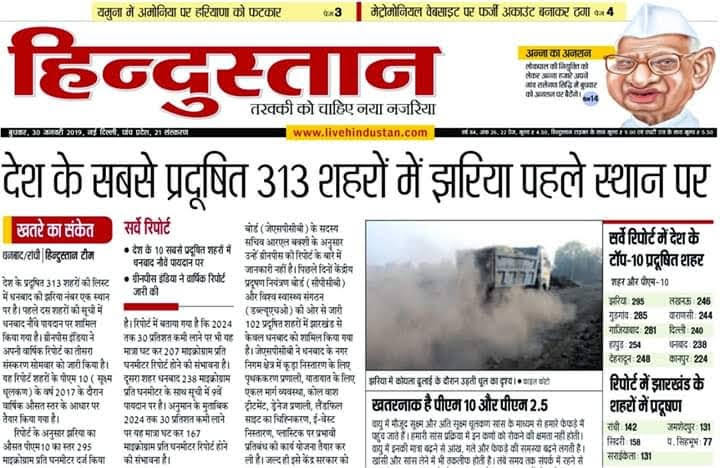 Share your comments and opinions in the comment section to discuss about the Jharia Coal Mines and Pollution control.
How to reduce pollution in coal field areas from Priti Gupta